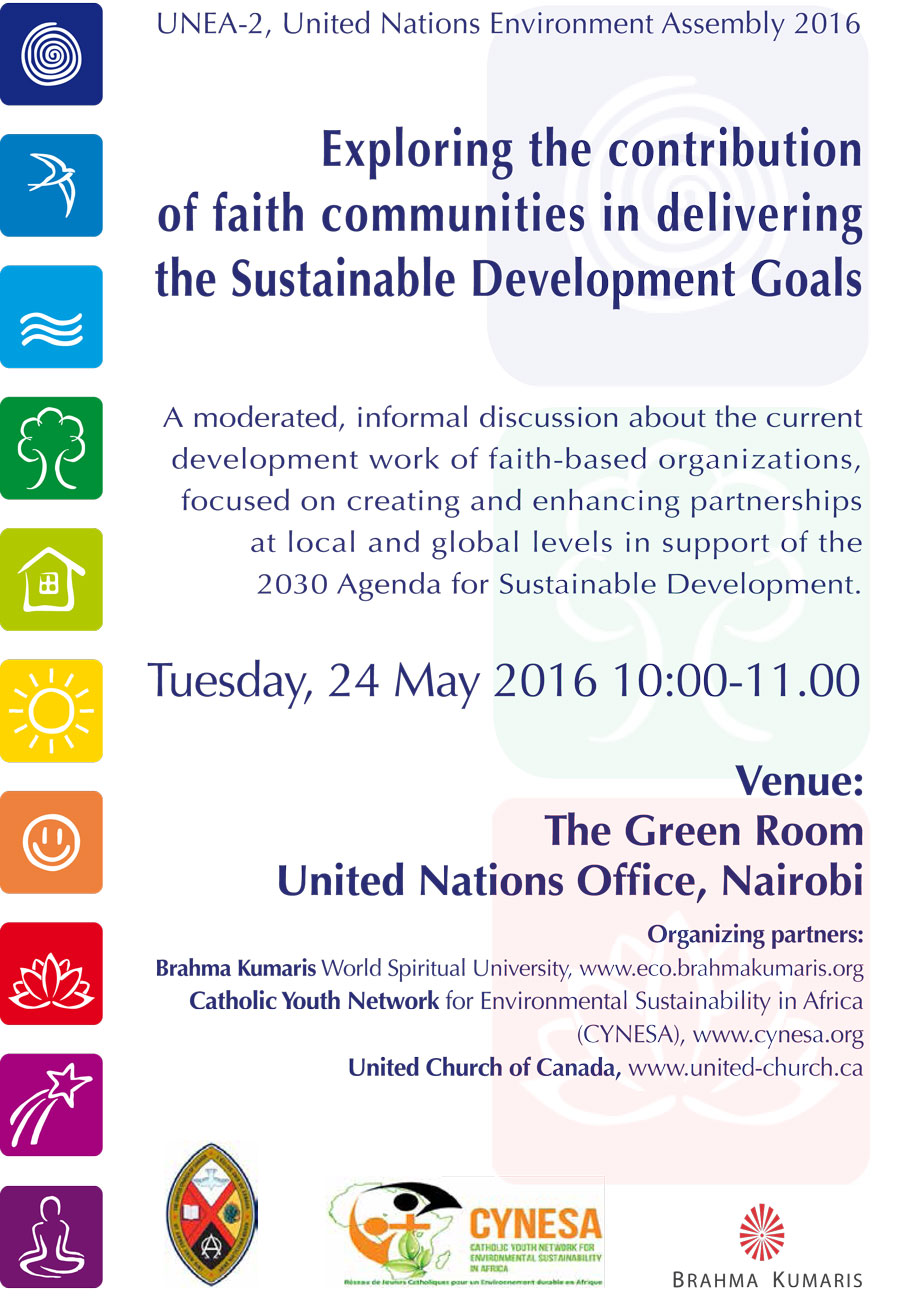 The world’s highest-level decision making body on the environment, will hold its second session in Nairobi, Kenya, 23rd to 27th May, under the overarching theme, “Delivering on the environmental dimension of the 2030 Agenda for Sustainable Development. The United Nations Environment Assembly (UNEA) enjoys the universal membership of all 193 UN member states, in addition to major groups and stakeholders.

In March 2016, CYNESA was officially accredited to the UNEA of the United Nations Environment Program (UNEP). This means that during UNEA sessions, CYNESA has the opportunity to:

UNEA-2 offers a rich menu of events for the expected 2000-plus participants, including side-events, symposia, sustainable innovations expo and green room events.

In conjunction with the United Church of Canada and Brahma Kumaris, CYNESA will host a ‘Green Room’ event, “Exploring the contribution of faith communities in delivering the Sustainable Development Goals”. The event will bring together participants, for a moderated informal discussion, about the current development work of faith-based organizations, focused on creating and enhancing partnerships at local and global levels, in support of the 2030 Development Agenda. The event will be part of CYNESA’s ‘Laudato Si month’, marking the one year anniversary of the launch of the encyclical Laudato Si’, and which will run from May 18th to June 19th.

Presenting a copy of the ‘Bristol Commitments’ to CYNESA Zimbabwe Team.

In September 2015, CYNESA participated in the launch of the Bristol Commitments, a set of 10-year action plans in support of the Sustainable Development Goals, presented by faith leaders, at a meeting co-hosted by the United Nations Development Programme (UNDP) and the Alliance of Religions and Conservation (ARC). CYNESA’s long term action plan on the SDGs, echoes Pope Francis’ call in paragraph 13 of the encyclical Laudato Si’: “Young people demand change. They wonder how anyone can claim to be building a better future without thinking of the environmental crisis and the sufferings of the excluded”. It is this vision that CYNESA will seek to articulate and deepen, in her engagement with other stakeholders during the UNEA-2.

The President of the Pontifical Council for Justice and Peace, His Eminence Peter Cardinal Turkson, recently highlighted how “from the very beginning of these “new things” or res novae, the Church sought to grapple with all this dizzying change.”

Speaking at the ‘Global Responsibility 2030’ conference in Bad Honnef, Germany, in March, Cardinal Turkson reminded participants that, “Pope Francis is calling for sustainable development, yes, but ultimately for a deeper vision of what is to be served by that development: the Earth returned to its health and beauty, home for all our future generations. For this we must pray to work with each other, guided by God, in order to make the Earth worthy once again of comparison with Heaven. Dein Wille geschehe, wie im Himmel, so auf Erden. – Thy Will be done on Earth as it is in Heaven!”