The team was quite excited about this visit, bearing in mind that just over 2 months earlier, Pope Francis was staying at the Nunciature during his 2015 visit to Kenya. The Nuncio offered a warm welcome to the visitors from CYNESA, as the meeting started with Allen updating the Nuncio on CYNESA’s progress. The report-card included the setting up of a secretariat, and significant progress in other projects such as the Climate Change Toolkit and the planning of an ecology program for the World Youth Days, in July 2016 in Poland.  Plans were also underway for a summit to be held in May 2016, bringing together CYNESA members from national chapters.

The Nuncio lauded CYNESA’s efforts and observed that the Pope’s visit to Africa in 2015 and the release of the encyclical, were key moments that CYNESA could build on. CYNESA members were present when the Pope made his address at the United Nations in Nairobi, in November 2015. The Nuncio had a tight schedule considering that he is also the Permanent Representative of the Holy See Mission to the United Nations Environment Program (UNEP) and UN-Habitat.

David then gave an update on CYNESA’s efforts and plans to create awareness of the encyclical, Laudato Si’, and to set up study groups among Catholic parishioners and groups. Anne narrated details of the visit to Rome by four CYNESA members, who took part in the Emerging Leaders’ Multi-faith Climate Convergence, which included a climate march to thank the Pope for the encyclical, Laudato Si’. The convergence brought together people from different nationalities, faiths and organizations, to discuss climate change and other environmental issues. They also discussed possible solutions and created networks from these meetings. 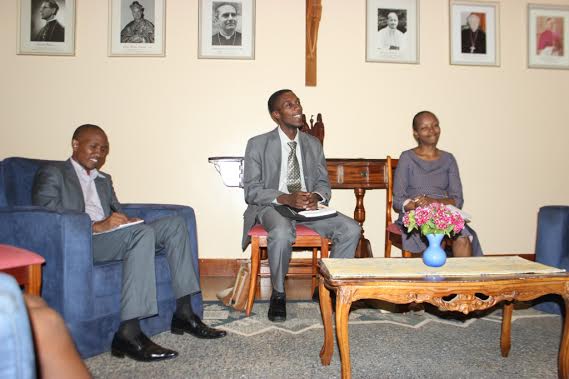 In a brief video interview moderated by Hellen, Archbishop Balvo discussed the relevance of Laudato Si’ to environmental efforts around the world. He also highlighted the role of young people like CYNESA members, in spreading the message of Laudato Si,’ and the impact they could have on caring for creation and influencing their communities to do the same. He concluded by expressing how wonderful it was to host the Pope in Kenya and his hopes that the visit left a lasting impact on the Church in Kenya, and especially on the youth.